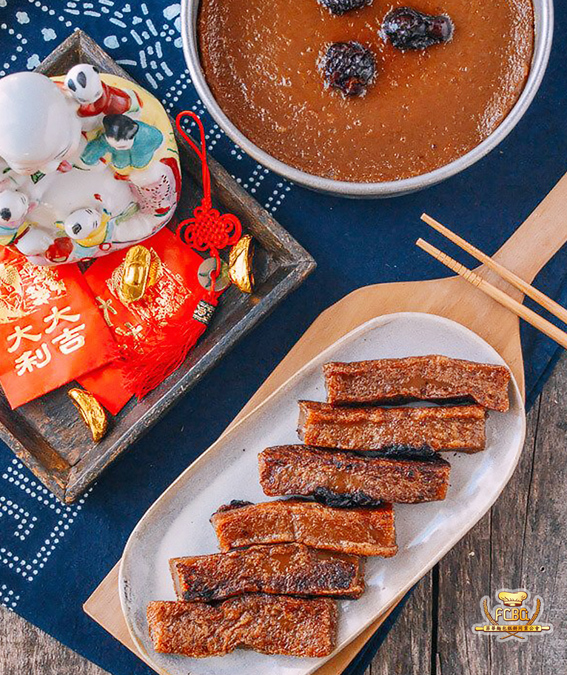 The following are several popular Chinese New Year desserts, each with an auspicious symbolism.

This sweet (a salty cake is also available), temptingly squishy cake is mainly made from glutinous rice flour and brown sugar. Its round shape represents togetherness and completeness.

These sweet rice balls are often infused with black sesame seeds or mashed peanuts. Eating this auspicious dessert signifies unity within the family.

The Chinese name for steamed sponge cake is 发糕 (fāgāo), reminiscent of the Chinese for making a fortune (发财). It is a traditional sweet food and many Chinese people eat it for breakfast.

Because glutinous rice wine is used when making this brown or white steamed sponge cake it has a special fragrance. It will become cold and hard so just steam it again and then you can enjoy the spongy cake.

Eight is a lucky number in Chinese culture, hence the name of ‘eight-treasure rice pudding’. It is true to the dessert’s name that the pudding really has eight types of “treasure”, including red jujubes, lotus seeds, dried longans, and other various dried, candied fruits.

The steamed pudding is soaked in sugar and butter, and the top is interspersed with the eight treasures.

This fried food is a little bit harder than a sesame seed baguette. Two or three bars of dough paste are twisted together and fried until they are crispy. It is much more popular in North China.

The fried dough twists produced in Tianjin are the most famous in China, due to their renowned crispy texture, rich flavor, and creative ingredients. They are a specialty of Tianjin.

This is another popular way to eat peanuts, especially during the Chinese New Year period. This sweet, crispy, and fragrant dessert is mainly made with shelled peanuts and malt sugar.

It is a popular Chinese New Year dessert and almost the whole of China shares the same manufacturing method.

The main ingredients are walnuts and flour. The temptingly yellowish cookies have many cracks in them, with a soft texture and walnut fragrance.